So for Halloween, I dressed as the ghost of Scienceblogs. 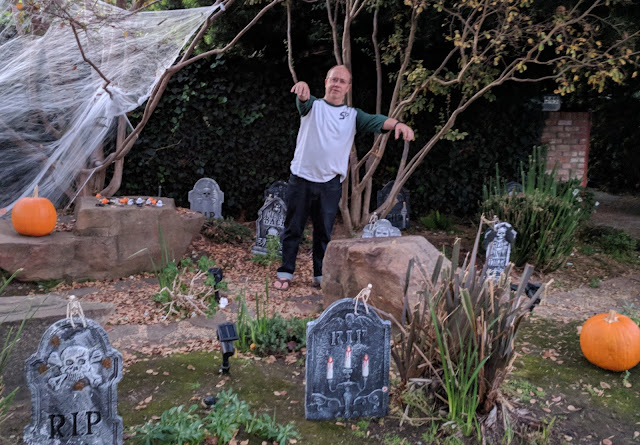 I am still working on getting all the old posts copied over here, but it shouldn't take much longer.
Posted by Tim Lambert at 00:26 23 comments:

How to get unscientific rubbish in the Age's science section

This
[story](http://theage.com.au/news/Science/Global-warming-cyclical-says-climate-expert/2005/06/12/1118514924793.html)
on Bob Carter in the Age is a good one for playing
[Global Warming Skeptic
Bingo](http://deltoidblog.blogspot.com/2005/04/gwsbingo.php). Though I think I
should add a rule to the effect that if a numerical claim is wrong by
more than an order of magnitude you get a free square on the bingo
board. Look at what Carter claims:

>Carbon dioxide was a minor greenhouse gas, responsible for 3.6 per
>cent of the total greenhouse effect, [Carter] said. Of this, only 0.12 per
>cent, or 0.036 degrees Celsius, could be attributed to human activity.

Actually, [calculations
show](http://www.realclimate.org/index.php?p=142) that without
CO2 the Greenhouse effect would be about 91% as strong.
Further, he implies that only 0.12/3.6=3% of the CO2 in the
atmosphere is due to human activity. But the concentration of
CO2 in the atmosphere has increased [from 280 ppm to 380
ppm](http://www.grida.no/climate/ipcc_tar/wg1/fig3-2.htm) and this
increase is [all due to human
activity](http://www.realclimate.org/index.php?p=160). So, correcting
Carter's numbers we have that 100/380=25% of the CO2 in the
atmosphere is anthropogenic, so 25% of 9%=2.4% of the greenhouse
effect or 0.7 degrees Celsius is man-made. Carter is wrong by a
factor of 20. Actually he's wrong by more than a factor of 20 since
his calculation assumes that the quantity of water vapour in the
atmosphere is fixed and this isn't true. As the globe warms there is
more water vapour in the atmosphere and this further strengthens the
greenhouse effect.

So how did something this inaccurate get into the Age?
Well, Carter gave a speech to the Victorian Farmers Federation so the
reporter who wrote the story was their agricultural reporter rather
than their science reporter who might have noticed that Carter was
spouting a load of rubbish.